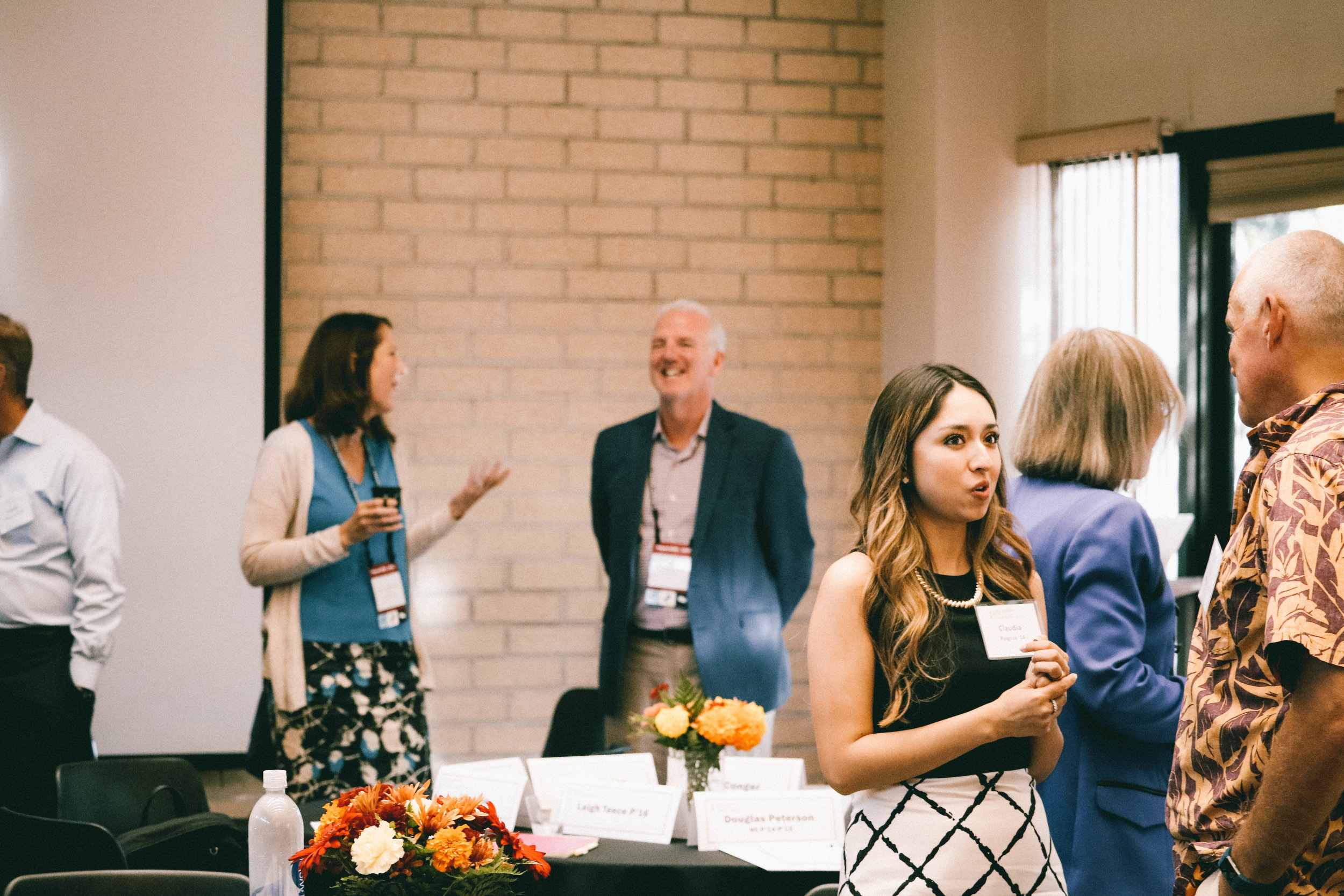 To begin the panel, Raigoza mentioned how none of the panelist found themselves in their intended career paths. Dutt talked about his dream of becoming a child development psychologist, and Swan shared his love for sports business. Now, they find themselves working in product innovation and private equity, respectively. Swan told students to keep their eyes open to different opportunities, because “I never thought I would find myself working at Skyview in private equity.”

Hickerson, who retired from the aviation industry working in various management roles, told students to “follow their passions wherever they may take them.”

How students discover these passions led to the next round of lively debate amongst the panelists.

Paredes referenced how she struggled between choosing chemistry or art as a major due to the disparity in hourly wages. This led to her first point: knowing your values. “You must decide what you value most,” she claimed.

Dutt also noted that students should constantly seek out mentors positioned not just within their desired career field but also outside of it. This, he argued, “allows you to exhaust all of your options and experience different roles in order to accurately gauge your interests.”

But even after undergraduate students find their passion, how should they situate themselves in positions likely for success?

Paredes listed some skills such as creativity, leadership, and grit that campus recruiters look for in their hires. Hickerson argued for strong quantitative skills and a little economic understanding. Dutt reaffirmed the need for strong quantitative skills, but also professed how “it’s never the same two or three skills” that he looks for. He zeroes in on students who can view situations from unique perspectives. For example, he highlighted how he once hired a theatre major at his tech company for a data analytics role because of the applicant’s theatre training primed her with the ability to think on their feet, which is invaluable during meetings with clients. The lesson here is figuring out how to take what you learn in the classroom and apply it elsewhere.

But what role did failure play in the current success of the panelists?

Raigoza led with “failure is not the opposite of success, it is an element of success, because everytime you fail, you get closer to success.” Swan added that students should “take on failure with a new lens.” Dutt provided a more practical example, because he is currently involved in a startup that is on the precipice of almost going under. He revealed that his biggest fear right now is that he may not be able to make the next payroll, since the company has run out of funds, and isn’t generating enough revenue to break even. But in light of this trial, he still managed to acknowledge how important it is to learn from failure rather than dwell in it.

During an interview with Raigoza, I ask her to describe her career journey in one word. She said, “bashert,” which is a Jewish word that means everything happens for a reason or meant to be. We tend to label failure with a shameful reputation, but Dutt, Raigoza, Swan, Paredes, and Hickerson are all proud to be products of failure and perseverance. They prove to us that we can’t let fear of failure define our lives or our will to succeed, and as Hickerson put it, “don’t be afraid to take risks… look for opportunities even if it involves a little bit of a risk.”

After hearing all of this advice, I not only feel more confident about facing failure but also more prepared to jumpstart my career. Are you?